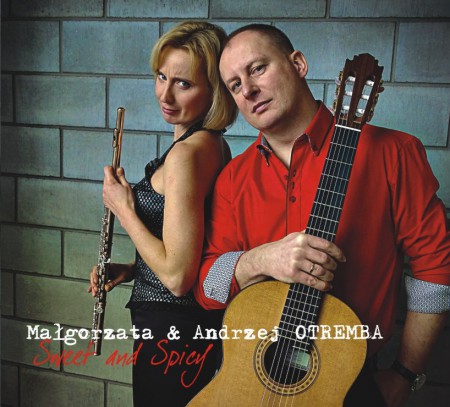 This is the artisic output of the Duo Classico. It is the love for music which connected a flautist and a guitarist permanently: as they have been nurturing an artistic and emotional relationship for many years. Music connects people and, as in our life, sometimes it is sweet, sometimes spicy, and this is expressed in our album.

Malgorzata Otremba- flautist, chamber and orchestral musician. A graduate of the Academy of Music in Katowice. Winner of national music competitions and international Scholarships (Canada, Switzerland, United Kingdom). Currently, flautist in NOSPR- Polish National Radio Symphony Orchestra in Katowice, with which she had the opportunity to travel on tour across almost all continents of the globe and performing with the greatest conductors in the world.

Andrzej Otremba- guitarist, chamber musician and educator. A graduate of the Academy of Music in Katowice. Laureate and finalist of many national and international competitions (Germany, France and Austria). The musicians have been performing together on stage since 1996, when they received the prize at the International Chamber Music Competition in Przemysl. The duet has performed hundreds of concerts and recitals in Poland at noumerous guitar and chamber music festivals. They also gave concerts in Slovakia, Germany and France. Besides the compositions published in the album ‘Sweet&Spicy’, the band has a wide repertoire of renowned composers, such as: C. Ph. E. Bach, M.Giuliani, J.Rodrigo, C.Machado, Maximo Diego Pujol, B.Bartok.

Special thanks go to Michal Czachowski, who was inspiring us continuously while our album was coming into being. Thanks Miguel!.