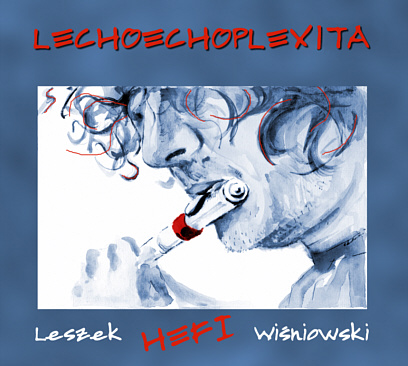 Lechoechoplexita is a studio realized material called Concerto for Flute, Saxophones and Captive Ssounds. The music that the listener receives is a sui generis melting pot of different musical influences, where ingredients like jazz, ethno, electronica and finally contemporary music are agreeably put together. This is the painstakingly woven spectacle of sounds starring flute and saxophone Although the flute and sax virtuoso experiment with different aesthetical arenas they are often risky, still the whole story remains homogonous. As far as inimitable sound and general concept is concerned it is probably the only such record in the world.

Leszek Hefi Wiśniowski - the flutist, saxophone player and the composer is a graduate from Music Academy of Jazz in Katowice, the flute faculty. He is a laureate of numerous awards and honors in such a prestigious events like: "Jazz Juniors"- International Competition of Young and Debut Jazz Ensembles (1993), Siedlce Jazz Competition (1996), The Ministry of Culture Award (1998), "New Tradition"- Folk Music Competition, Warsaw (2001). Leszek Wiśniowski used it to bring a consistency to his jazz-oriented style that reached easily across genre boundaries. The distinctive sound as well as his technique allows him to play with the best musicians and composers who represent different musical genres: Anna Jurksztowicz, Krzesimir Dębski, Wojtek Mrozek, what is more, he plays with such ensembles like Indialucia, Turnioki, Viva Flamenco. Leszek Wiśniowski also played as a soloist with symphony orchestras. As a flutist and saxophone player he is the performer of soundtrack to Stara Baśń (The Old Tale) (dir. Jerzy Hofman) and Magiczne drzewo (The Magic Tree) (dir. Andrzej Maleszka)