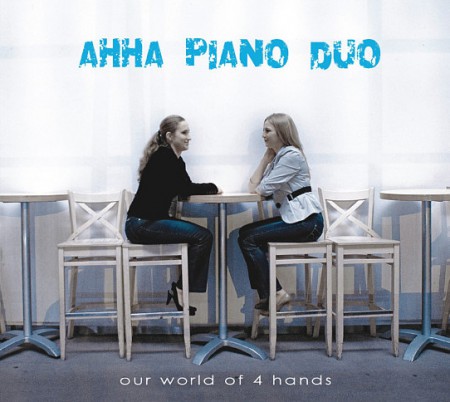 Our World of 4 Hands

AHHA Piano Duo is a blend of two energetic pianists’ personalities - Agata Hołdyk and Aleksandra Hałat, who undertake a spirited musical dialogue, unfolding on many levels and in multiple styles, whether they play compositions for four hands or two pianos.

AHHA Piano Duo is a blend of two energetic pianists’ personalities- Agata Hołdyk and Aleksandra Hałat, who undertake a spirited musical dialogue, unfolding on many levels and in multiple styles, whether they play compositions for four hands or two pianos. Their common artistic vision, a result of the pianistic artistry, concert-hall understanding and the artists’ vivid tempers is present and noticeable at every concert. The pianists invite also other artists to their programmes to create extraordinary music projects involving dance, interpretation of music through movement and video installations. The character of the AHHA Piano Duo is completed by a diverse and carefully selected repertoire which includes works from the baroque to contemporary music. The pianists’ willingly expand their repertoire to include film scores arrangements. The AHHA Piano Duo was formed in 2009 by two pianists- Agata Hołdyk and Aleksandra Hałat, graduates from the Academy of Music in Katowice. They studied also at Universität für Musik Und darstellende Kunst in Graz, Austria. The pianists’ artistic achievements include prizes won in international competitions: the second prize in the Bradshaw & Buono International Piano Competition in New York (records contest – 2011), an award in International Piano Competition “Concours Grieg“ in Oslo (Norway, 2010). The duo also took part in the first Festival of European Schools of Art and Creativity in Cieszyn and many other concerts in Poland, receiving warm welcomes from the audience and positive critical reviews. “Our raison d'etre is to promote the Polish culture both in the country and abroad. We want to focus our special attention on the music of the Silesian region, as a place where our common artistic identity came to life. We want to present the classical and film music in a new form of concert- projects, blending a diversity of art forms and styles. We invite other artists to collaboration to create a new quality by integrating different means of artistic expression. Our repertoire includes a wide selection of classical music, from the baroque to contemporary music and film scores arrangements for four hands and two pianos. Through our individual approach to music, passion and full engagement in every project we strive to accomplish our mission- sharing music with other people”. Agata & Aleksandra